1000BASE-LX/LH was standardized six years after the initial gigabit fibre versions as part of the Ethernet in the First Mile task group. It is very similar to 1000BASE-LX, but achieves longer distances up to 10 km over a pair of single-mode fibre due to higher quality optics. The 1000BASE-LX/LH SFP module, compatible with the IEEE 802.3z 1000BASE-LX standard, operates on standard single-mode fibre-optic link spans of up to 10 km and up to 550 m on any multimode fibres. Duplex LC/PC connector. 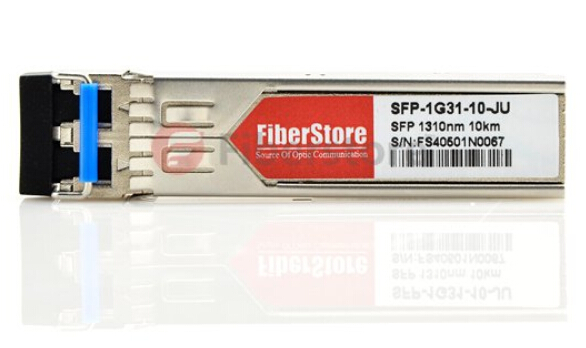 Fiberstore 1000Base-LX/LH SFP module over single-mode fibre, which is a high performance and cost effective transceiver. It is designed to meet Gigabit Ethernet (1000Base) application. The transceiver consists two sections: the transmitter section consists of a high reliability 1310nm FP LD with monitor photo detector (MPD) in eye safety; the receiver section consists of a high-speed InGaAs PIN photodiode (PD) and trans-impedance preamplifier. The output of the PD drives the post-amplification, quantizing, and optical signal detection circuits. The receiver is built in the LOS monitoring function. For further information, please see SFP MSA and SFF-8472 standard. SFP transceivers(Small form factor pluggable) is prefered to  easier to change and easier for maintenance rather than traditional modules and is expected to perform at data speeds of up to five gigabits per second (5 Gbps), and possibly higher.

SFP Transceivers have a wide range of detachable interfaces to multimode/single-mode fibre optics, which allows users to select the appropriate transceiver according to the required optical range for the network. Signal transmitting rate of SFP modules range from 100Mbps up to 4Gbps or more, working distance of these SFP transceiver modules can be from 500 meters to 100 kilo meters, working wavelength of different SFP modules are typically 850nm, 1310nm and 1550nm, there are also CWDM type SFP transceivers available. There are SFP product numbers below:

GLC LH SM is the Cisco 1000Base LX/LH SFP transceiver module, it is one of the most commonly use SFP. SFP units like the GLC-LH-SM in general have different transmitter and receiver types that allow the consumer to select the best option for their specific situation. Its primary function is to interface with a networking cable and increase the connectivity between two network devices such as mother boards, routers and media converters.

There are many options when it comes to finding a GLC-LH-SM. The GLC-LH-SM SFP Transceiver from the reseller is a Cisco brand mini-GBIC but can be used to work with anyone that builds SFP ports such as HP, Finistar, and Juniper among many others. Finding a compatible transceiver can eat up valuable time for IT pros who are upgrading networks and T3 systems provides the best value and support.

Cisco GLC-LH-SM transceiver is a tool utilized to join Cisco machines like wan interfaces or network switches that make use of sfp transceiver module technological expertise. It is characterized by an LC type interface with a higher density as well as a smaller fibre optic connecter. It is suitable for both single and multimode use and has a working distance of 10 kilometers or 550 meters over MMF. It is compliant to IEEE standards in line with Gigabit Ethernet and comes in a variety of styles to ensure users have the exact choice for their needs.

The GLC-LH-SM is a SFP fibre optic transceiver works at a 1300nm wavelength. When utilized as GLC-SX-MM SFP, the unit has a tier-one laser of 1,300nm for medium range fibre applications. In MMF configuration, the maximum distance is 1,800 ft and on SMF the max distance is 10 Km (6.2 miles).