Nowadays, fibre optic technology shows its unsurpassable advantage in telecommunication. Hence, optical transceiver modules are widely used in data centre and other situations. When it comes to various types of data rate and interface of optical transceivers, there are lots of abbreviations to clarify. This article focuses on the introduction of QSFP connector, QSFP+ connector and QSFP28 connector. They share the same small form factor, but differ in supporting data rate and breakout connection.

QSFP is the abbreviation of Quad (4 channel) Small Form Factor Pluggable. Supporting Fibre Channel, Infiniband, Ethernet, Sonet/SDH and other proprietary interconnects, QSFP connector is a hot-pluggable, compact transceiver available for use in singlemode and multimode applications. QSFP transceiver can also support 4 independent channels which can transmit individually at the data rate up to 1.25Gbp/s and the aggregate speed of the 4 channels up to 4.3Gbp/s. For using 4x1G lanes, QSFP connector was only found in some FC/IB contexts.

Short for Quad Small Form Factor Pluggable Plus, QSFP+ connector is regarded as the enhanced generation of QSFP connector. Why do we call QSFP+ the plus one? Because it can support Infiniband, Fibre Channel and Ethernet at 10Gbp/s per channel, thus the combined data rate of the 4 channels can reach 40Gbp/s, which is a distinct improvement in data transmission speed. Besides, like QSFP connector, 40G QSFP+ interface can support transmission and network link over both singlemode and multimode infrastructures. To enable 40G QSFP+ connector to be splitted into 4 independent data streams for different network equipment, AOC breakout cable, DAC breakout cable and other types of breakout cables are used. Besides, the main types of QSFP+ connector include QSFP+ SR4, QSFP+ PLRL4, QSFP+ LR4 and OTU3, QSFP+ CSR4, QSFP+ UNIV, QSFP+ LR4L, QSFP+ SR Bi-Directional, QSFP+ PLR4, QSFP+ER4 and OTU3.

With the same quad based interface as QSFP and QSFP+ connector, QSFP28 fibre optic transceiver can transmit optical signals at 100Gbp/s. Each channel of QSFP28 connector can transmit individually at the data rate up to 28Gbp/s. Outstripping CFP, CFP2 and CFP4 connectors, QSFP28 connector has become the preferred solution of 100G network upgrade for its high flexibility and smaller form type. The flexibility of QSFP28 allows it to be used in several kinds of combination, including 100Gbp/s, 2x50Gbp/s and 4x25Gbp/s. Like QSFP+ connector, depending on the application, there are different options of breakout cable to consider, such as AOC breakout cable, DAC breakout cable and other types of breakout cables. Besides, there is an important note, that a QSFP28 connector can’t be broken down into 10Gbp/s channels. However, QSFP28 is backward compatible, so when it is used in a QSFP+ port , it would allow a breakdown into 4x10Gbp/s SFP+ channels. Lastly, there are several types of QSFP28 connector: QSFP28 SR4, QSFP28 PSM4, QSFP28 CWDM4 and QSFP28 LR4.

Nowadays, the requirement for bandwidth in cloud data centres is increasing strikingly. To meet the demand for higher bandwidth, networking and the Ethernet industry are moving toward a new direction. Discussions previously focusing on 10GbE and 40GbE are now shifting onto 25GbE. It seems that 25GbE is more preferred and accepted by end users, which poses a threat to 10GbE and 40GbE. Why does it happen? This post will lead you to interpret 25GbE in an all-sided perspective.

25GbE is a standard developed by IEEE 802.3 Task Force P802.3by in July 2014, used for 25G Ethernet servers and 25GbE switch connectivity in a data centre environment. The single lane design of 25GbE gives it a low cost per bit, which enables cloud providers and large-scale data centre operators to deploy fewer switches and cables to meet the needs while still scaling their network infrastructure. The following table provides a summary of key upcoming IEEE standard interfaces that specify 25GbE.

Cloud Will Drive to QSFP28 and SFP28

The 25GbE physical interface specification supports two main form factors—SFP28 and QSFP28.
SFP28 is used for a single 25GbE port. The SFP28-25G-SR-S is an 850nm VCSEL 25GbE transceiver which is designed to transmit and receive optical data over 50/125µm multimode fibre (MMF) and support up to 70m on OM3 MMF and 100m on OM4 MMF.

The QSFP28 transceiver and interconnect cable is a high-density, high-speed product solution designed for applications in the telecommunication. The interconnect offers four channels of high-speed signals with data rates ranging from 25 Gbps up to potentially 40 Gbps, and will meet 100 Gbps Ethernet (4×25 Gbps) and 100 Gbps 4X InfiniBand EDR requirements. 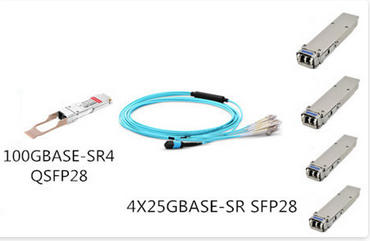 While 10GbE is fine for many existing deployments, it cannot efficiently deliver the bandwidth required by next-generation cloud and web-scale environments. And 40GbE isn’t cost-effective or power-efficient in ToR switching for cloud providers. Thus, 25GbE was designed to break through the dilemma.

SerDes is an integrated circuit or transceiver used in high-speed communications for converting serial data to parallel interfaces and vice versa. The transmitter section is a serial-to-parallel converter, and the receiver section is opposite. Currently, the rate of SerDes is 25 Gbps. That is to say, we can only use one SerDes lane at the speed of 25 Gbps to connect from 25GbE card to the other end of 25GbE card. In contrast, 40GbE needs four 10GbE SerDes lanes to achieve connection. As a result, the communication between two 40GbE cards requires as many as four pairs of fibre. Furthermore, 25 Gbps Ethernet provides an easy upgrade path to 50GbE and 100GbE networks, which utilise multiple 25GbE lanes.

At present, the mainstream Intel Xeon CPU only provides 40 lanes of PCIe 3.0. The lane bandwidth of a single PCIe 3.0 is about 8 Gbps. These PCle lanes are used for many connections. Therefore, it is necessary to consider the utilisation of limited PCIe lanes by the network cards. Single 40GbE NIC needs at least one PCIe 3.0 x8 slot, so two 40GbE cards need to occupy two PCIe 3.0 x8 lanes. Even if the two 40GbE ports can run full of data at the same time, the actual lane bandwidth utilisation is only: (40G+40G) / 8G*16= 62.5%. On the contrary, 25GbE card only needs one PCIe 3.0 x8 lane, and then the utilisation efficiency is 25G*2 / (8G*8) = 78%. Apparently, 25GbE is significantly more efficient and more flexible than 40GbE in terms of the use of PCIe lanes.

25GbE enables resellers and their customers to provide 2.5X the performance of 10GbE, making it a cost-effective upgrade to the 10GbE infrastructure. Since 25GbE is delivered across a single lane, it provides greater 25GbE switch port density and network scalability compared to 40GbE, which is actually four 10GbE lanes. Thus, it costs less, requires lower power consumption and provides higher bandwidth. What’s more, 25GbE can run over existing fibre optic cable plant designed for 10, 50 or 100GbE and also 40GbE by changing the transceivers.

Figure 4: Bandwidth comparison for 25GbE and other Ethernet speeds

No matter the market research or the attitude of users, 25GbE seems to be the preferred option down the road. Actually, coming back to reality, there will be a significant increase in 100GbE and 25GbE port density in the next few years. If you need any optics and cabling solution for your 25GbE infrastructure, feel free to contact sales@fs.com.

Related Article: How to Use 25G Switch for Switch-to-Server Connection

SFP is short for small form factor. It refers to fibre optic transceivers supporting 1Gbps data rate. Except SFP, current market is full of various types of fibre optic transceivers, such as QSFP, QSFP+ and QSFP28. At the first sight, these transceiver modules are very similar. But actually, they have big differences. To know the difference clearly is good to make the right choice for your network connection. So what are the differences between QSFP,  QSFP+, QSFP28?

QSFP+ and QSFP28 differs in “28” as the name says. QSFP28 is a hot-pluggable transceiver module designed for 100G data rate. QSFP28 integrates 4 transmit and 4 receiver channels. “28” means each lane carries up to 28G data rate. QSFP28 can do 4x25G breakout connection, 2x50G breakout, or 1x100G depending on the transceiver used. While QSFP+ supports the data rate of 40G, 4 channels for transmitting and 4 channels for receiving, each lane carrying 10G. QSFP+ can break out into 4x10G or 1x40G connection.

The difference between QSFP vs QSFP+ vs QSFP28 has been stated clearly in this article. Though QSFP is thought as QSFP+, when talking about 40G, actually we mean QSFP+. QSFP+ vs QSFP28 mainly differs in data rate and breakout connection. So you must be sure what you need is 40G QSFP+ or 100G QSFP28 for high density applications, especially when connecting with 10G SFP+.

Related Article:  How to Match Fibre Patch Cable for Your Multimode SFP?

As the increasing bandwidth requirements of private and public cloud data centers and communication service providers, 25Gbps Ethernet over a single lane will have a significant impact on server interconnect interfaces. It may become the new upgrade path to 100G (10G-25G-100G instead of 10G-40G-100G). This article will give brief introduction about 25GbE Ethernet.

Number of Lanes 40G QSFP+ interface is constructed from four parallel links. Extending QSFP+ onto fibre requires four parallel 10Gb streams to transport this to the receiving QSFP+ parallel optics. The data transmission is achieved by four lanes which significantly reduce switch port density per switching chip and increases the cost of cabling and optics. While the 25GbE standard requires only a single lane, while delivering 2.5 times more throughput compared to current 10GbE solutions and significantly saving the cost compared to 40GbE solutions.

Form Factors The 25GbE physical interface specifications support the form factors including QSFP28 and SFP28. QSFP28 has four lanes and each lanes supports 25 Gbps speed. SFP28 has only one lane and it also supports 25 Gbps speed. Current switch doesn’t support 25G SFP28 port. So the solution for 25G is to use a breakout cable that allows four 25GbE ports to connect to a 100GbE QFSFP28 switch port.

First, more data and switch port density. Compared with 10G solution, 25GbE standard can provide 2.5 times more data. And it can also offer 4 times switch port density compared to 40G solution. Second, save the cost. Since it can provide greater port density, fewer ToR switches and cables are needed. In that way, it reduces the construction cost compared with 40GbE. Third, it features lower power and smaller footprint requirements. Due to these special benefits, 25GbE is believed to be popular in no time. According to a recent five-year forecast, it’s said that annual shipments of 25GbE ports will be 2.5 times greater than 40GbE ports by 2018. 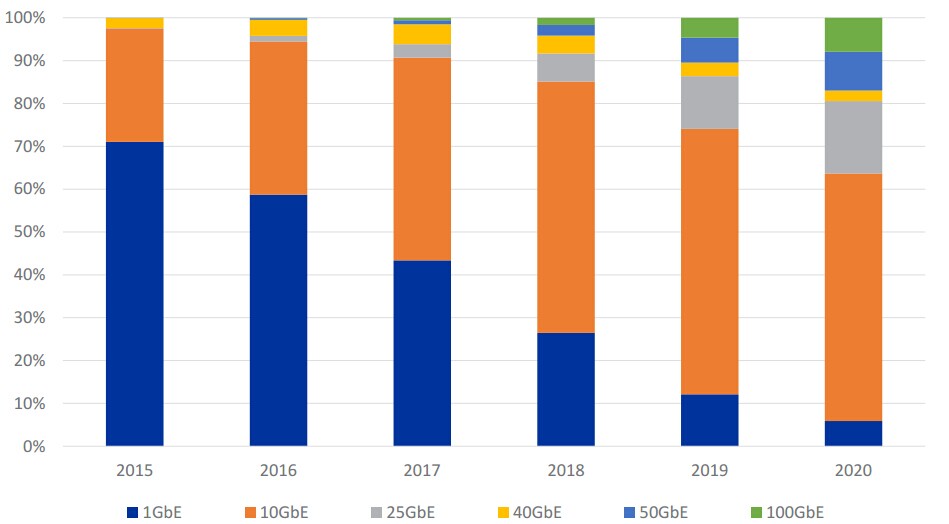 FS.COM has released 25G DAC (direct attach copper) cables which include 100G QSFP28 to 4xSFP28 and 25G SFP28 to SFP28 with the length from 1 m to 5 m. QSFP28 refers to the 100G DAC cable using the QSFP+ form factor, and SFP28 refers to the 25G DAC cable using the SFP+ form factor. The form factor remains the same but the new standard will require improved cables and connectors capable of handling additional bandwidth. Existing QSFP+ and SFP+ cable assemblies are not compatible with QSFP28 and SFP28 ports. 25G DAC is designed as the low-cost copper connection for ToR switches. 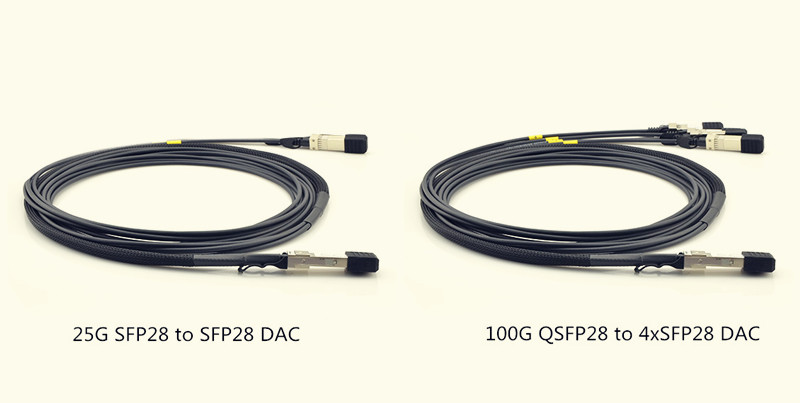 It’s certain that FS will soon release 25GBASE-T interface equipment. 25GBASE-T can support 30 metres long reach with low cost. It’s a cost-effective solution for ToR server connections using point-to-point patch cords, and enable End of Row (EoR) or Middle of Row (MoR) by using the 30 metre structured cabling. The connection can be achieved with the common use of RJ45 plug and connector. Compared with 25G DAC, it seems to be a more suitable way.

25GbE can provide up to 2.5 times faster performance than existing 10GbE connections while maximizing the Ethernet controller bandwidth/ pin and switch fabric capability. It can also provide greater port density with lower cost compared to 40GbE solutions. It’s analyzed that 25G will limit the deployment of 40G QSFP+ ports. By now, FS.COM has released 100G QSFP28 to 4xSFP28 and 25G SFP28 to 25G SFP28 DAC cables for 25G network. In the near future, there will more equipment for 25G including 25GBASE-T transceiver. Let’s look forward to it.