Gigabit Ethernet uses the same 802.3 frame format as 10Mbps and 100Mbps Ethernet systems. This runs at ten times the clock speed of Fast Ethernet, backward compatibility is assured with earlier versions, increasing its attractiveness by offering a high bandwidth connectivity system to the Ethernet family of devices.

This gigabit Ethernet version was developed for the short backbone connections of the horizontal network wiring. The SX systems operate full-duplex with multimode fibre only, using the cheaper 850nm wavelength laser diodes. The maximum distance supported varies between 200 and 550 meters depending on the bandwidth and attenuation of the fibre optic cable used. The standard 1000Base-SX NICs available today are full-duplex and incorporate LC fibre connectors.

SFP module is a hot-swappable input/output device that plugs into a Gigabit Ethernet port/slot, linking the port with the fibre-optic network. SFPs can be used and interchanged on a wide variety of Cisco products and can be intermixed in combinations of IEEE 802.3z compliant 1000BaseSX interfaces on a port-by-port basis.

1000BASE-SX SFP supports link length of up to 550m (depending on fibre type) on multimode fibre at 1Gbps. This optic works at 850nm wavelength and uses a LC connector.

If you want to purchase cheaper compatible 1000Base-SX SFP modules online, Fiberstore may be the better choice. Fiberstore is the largest fibre optics manufacturer of China, which offers various of SFP modules. And you will find third-party optical modules provided by fiberstore, like HP J4858b, J4858C, Jd118b and Netgear agm731f also Cisco GLC-SX-MM, etc.

Compatible SFP transceiver modules offered by Fiberstore are third-party and fully compatible with major brands (Cisco, HP, NETGEAR, Juniper, etc.) and supported by a Lifetime Warranty. Besides the compatible SFP, we can also customize SFP transceiver modules to fit customers’ specific requirements. Contact us by live chat or mails if you could not find the exact items you need. 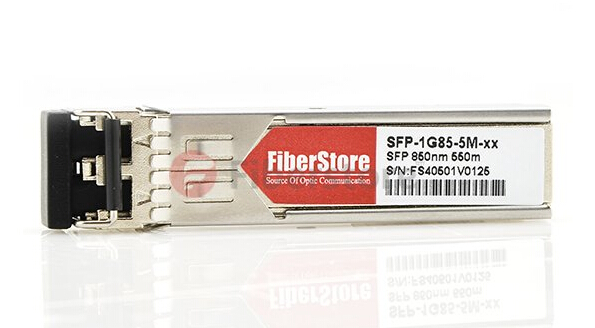 A distribution system port connects the controller to a neighbor switch and serves as the data path between these two devices. This chapter discusses a few common methods on the models that have these options.

• 1000BASE-SX SFP module which provide a 1000-Mbps wired connection to a network through an 850 nm (SX) fibre-optic link using an LC physical connector.

• 1000BASE-LX SFP module which provide a 1000-Mbps wired connection to a network through a 1300nm (LX/LH) fibre-optic link using an LC physical connector.

• 1000BASE-T SFP module which provide a 1000-Mbps wired connection to a network through a copper link using an RJ-45 physical connector.

• 1000BASE-SX SFP module, which provide a 1000-Mbps wired connection to a network through an 850nM (SX) fibre-optic link using an LC physical connector

• 1000BASE-LX SFP module, which provide a 1000-Mbps wired connection to a network through a 1300nM(LX/LH) fibre-optic link using an LC physical connector

• 1000BASE-T SFP module, which provide a 1000-Mbps wired connection to a network through a copper link using an RJ-45 physical connector

The Cisco Catalyst 6500 Series Switch Wireless Integrated Services Module (WiSM) and the Cisco 7600 Series Router WiSM have eight internal Gigabit Ethernet distribution system ports (ports 1 through 8) that connect the switch or router and the integrated controller.These internal ports are located on the backplane of the switch or router and are not visible on the front panel Through these ports the controller can support up to 300 APs.

The controller network module within the Cisco 28/37/38xx Series WiSM can support up to 6812 or 25 APs (and up to 256, 256, 350or 350 clients respectively), depending on the version of the network module. The network module supports these APs through a Fast Ethernet distribution system port (on the NM-AIR-WLC6-K9 6-access-point version) or a Gigabit Ethernet distribution system port (on the 8-, 12-, and 25-access-point versions and on the NME-AIR-WLC6-K9 6-access-point version) that connects the router and the integrated controller. This port is located on the router backplane and is not visible on the front panel.The Fast Ethernet port operates at speeds up to 100 Mbps, and the Gigabit Ethernet port operates at speeds up to 1 Gbps.

The Catalyst 3750G integrated Wireless LAN Controller(WLC) switch has two internal Gigabit Ethernet distribution system ports (ports 27 and 28) that connect the switch and the integrated controller.These internal ports are located on the switch backplane and are not visible on the front panel Each port is capable of managing up to 48 APs However, Cisco recommends no more than 25 APs per port due to bandwidth constraints. The -S25 and -$50 models allow a total of 25 or 50 APs to join the controller.