The thriving of 100G network makes the popularization of 100G optical transceiver modules, such as CFP modules, which provide a cost-effective solution for 100G network. What does CFP stand for? How many types of CFP? This article will offer you the CFP wiki.

What Does CFP Stand For?

CFP (C form-factor pluggable) transceiver module’s form factor is specified by the industry standard Multi-Source Agreement (MSA). MSA was designed for optical communication applications and formally launched at OFC/NFOEC 2009 in March. The C stands for the Latin letter C used to express the number 100 (centum), for the standard was firstly developed for 100 Gigabit Ethernet systems. CFP modules are designed to meet the challenge of extreme temperature, humidity and operating conditions. They are suited to 40G and 100G Ethernet data centre applications from the bottom to the top of rack or between racks. CFP was invented after SFP, but is much larger in size to support 100G Ethernet. CFP transceiver modules support both single mode and multimode fibre and a variety of data rates, protocols, and link lengths.

CFP MSA defines the CFP2 form factor of an optical transceiver which can support 10Gbit/s, 40Gbit/s, 100Gbit/s and 400Gbit/s interfaces for Ethernet and other applications. CFP2, with half the size of CFP module, can accommodate a wide range of power dissipations and applications. The module electrical interface of CFP2 has been generically specified to allow for supplier-specific customisation around various 4x25Gbit/s interfaces, but it can support 8x25Gbit/s, 10x10Gbit/s, and 8x50Gbit/s.

CFP MSA specifies the CFP4 form factor of an optical transceiver which can support 40Gbit/s and 100Gbit/s interfaces for Ethernet and other applications. CFP4 module electrical interface has been generically specified to allow for supplier-specific customisation around various 4x25Gbit/s and 4x10Gbit/s interfaces. Designed to support SMF and MMF, it is half the size of CFP2 transceiver module.

CFP MSA defines the CFP8 form factor of an optical transceiver to support 400 Gbit/s interfaces for Ethernet, Telecommunication and other applications. CFP8 has the size a little bit smaller than CFP2. Its module electrical interface allows for supplier-specific customisation around various 16x25Gbit/s and 8x50Gbit/s interfaces. Nowadays, 400G is considered to be the next major Ethernet speed for data centres after 100G, thus CFP8 transceiver module has a promising future on the market.

With the above-mentioned info, I believe you get a general idea about what does CFP stand for and the 4 types of CFP modules, including CFP, CFP2, CFP4 and CFP8 and their features. If you need to choose and buy CFP transceiver modules, FS is recommended. FS provides quality CFP modules with different data rates, which are compatible with major brands on the market. FS also provides other transceiver modules. For purchasing more high quality CFP modules with low cost or for more products’ information, please contact us at sales@fs.com.

In fibre optic communication, the industry has long decided the SFP+ (Small Form-factor Pluggable) at 10Gbps while the 40GBASE QSFP+ (quad small-form-factor pluggable) has become the 40Gbps form factor of choice. With 100Gbps still in its infancy, transceiver vendors are pursuing several client-side interfaces. Much work will be needed to reduce the size, power consumption and cost of 100Gbps interfaces before the industry settles on a single pluggable form factor for the single mode and multimode standards. This article will introduce CFP module. 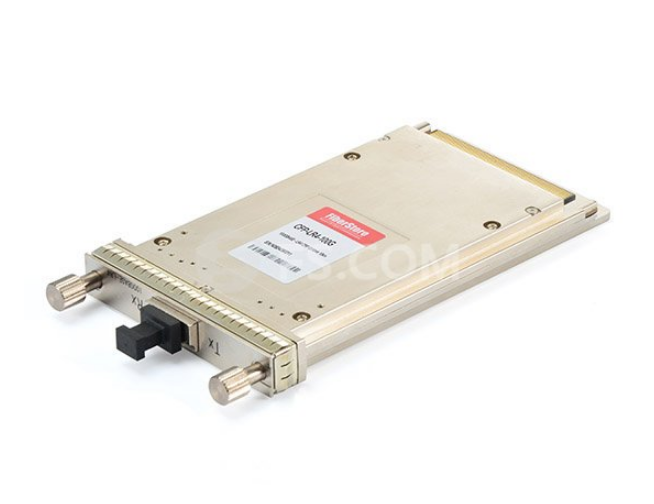 CFP module (C form-factor pluggable) is a Multi-Source Agreement (MSA) that defines a hot-pluggable optical transceiver form factor to enable 40 Gb/s and 100 Gb/s applications, including next-generation High Speed Ethernet (40 GbE and 100 GbE). Pluggable CFP transceivers will support the ultrahigh bandwidth requirements of data communications and telecommunication networks that form the backbone of the Internet. The CFP transceiver features twelve transmit and twelve receive 10Gb/s lanes to support one 100GbE port, or up to three 40GbE ports. Its larger size is suitable for the needs of single-mode optics and can easily serve multimode optics or copper as well.

The CXP transceiver form factor also provides twelve lanes in each direction but is much smaller than the CFP and serves the needs of multimode optics and copper.

The QSFP+ Module is similar in size to the CXP and provides four transmit and four receive lanes to support 40GbE applications for multimode fibre and copper today and may serve single-mode in the future. Another future role for the QSFP may be to serve 100GE when lane rates increase to 25Gb/s.

The Develop Trends Of Next Generation CFP Module

The current generation of modules are large because of heat dissipation issues due to high power consumption. For example, the CFP is rated for up to 24 watts of power dissipation but also needs to have a range of high density electrical connectors to connect to the baseboard. I take this to mean big, hot and heavy.

The purpose of the CFP MSA is to define a hot-pluggable optical transceiver form factor to enable 40-Gbps and 100-Gbps applications, including next-generation High Speed Ethernet (40 Gigabit Ethernet and 100 Gigabit Ethernet). The pluggable CFP transceivers are designed to support the ultra-high bandwidth requirements of data communications and telecommunications networks.

The key objectives of next-gerneration of CFP modules include significant reductions in module power dissipation and size, which are critical to increasing system port density and reducing overall optical port cost for system vendors and their customers. Critical technologies for tackling these design targets include 4x10G and 4x28G hybrid integrated TOSAs/ROSAs and process improvements in 28G gearbox and CDR ICs. There also may be consideration of uncooled CWDM 28G laser technology for realizing 100GbE optical transceivers in a QSFP+ like form factor for short singlemode fibre.

FS.COM developed the 40GbE CFP module for 10km transmission by using a high-speed four-wavelength CWDM laser diode, through the application of its own low-power-consumption drive technology and high-density mounting technology. Moreover, you can find other 10G, 40G fibre optic transceivers at this website.