40G has been widely used in data centres. 100G will also come soon. To meet these high bandwidths, related fibre cables are needed. OM3 and OM4 can be used to transmit parallel optical signal. But what is their difference? Which one will you choose for your network?

Both OM3 and OM4 are laser optimized fibre. Their cores size is 50/125. Connectors are the same and both operate 850nm VCSELS (Vertical-Cavity Surface-Emitting Lasers) transceivers. So the difference lies in the construction of the fibre cable, which means OM4 cable has better attenuation and can operate at higher bandwidth than OM3. 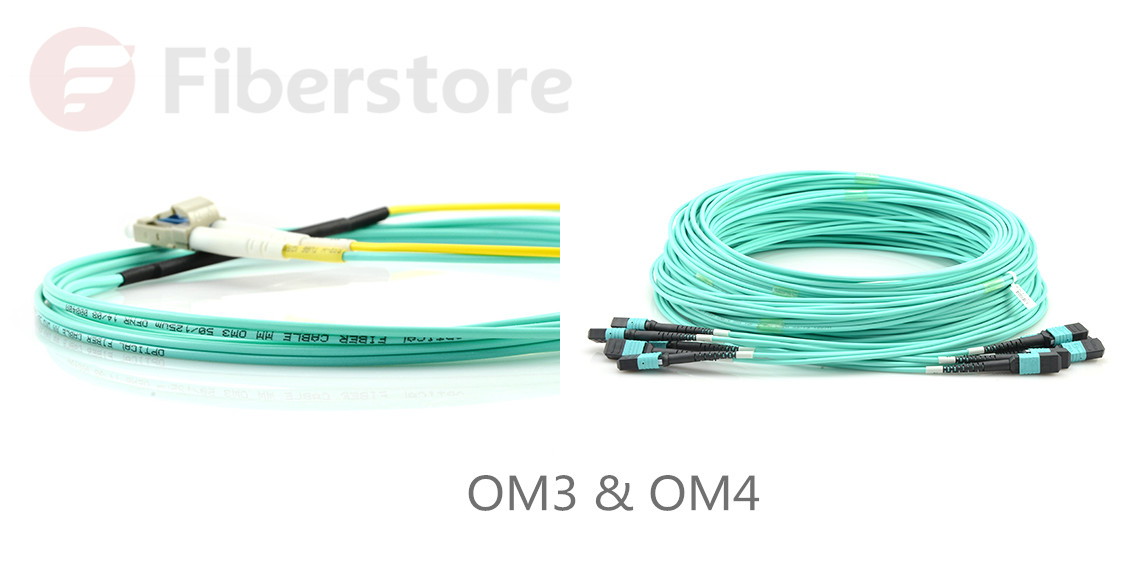 Attenuation is the reduction in power of the light signal as it is transmitted (dB). Attenuation is caused by losses in light through the passive components, such as cables, cable splices, and connectors. As the connectors are the same, so the difference in OM3 and OM4 performance is in the loss (dB) in the cable. The maximum attenuation of OM3 allowed at 850 nm by the standards is less than 3.5 dB/km, and less than3.0 dB/km for OM4.

Another factor influencing the cable function is dispersion. Dispersion is the spreading of the signal in time due to the different paths the light can take down the fibre. It has two types: chromatic and modal. In multimode fibre transmission, chromatic dispersion is negligible and the modal dispersion is the limiting factor.

Compared with OM3, OM4 has a lower attenuation and operates at a higher modal bandwidth. That means over OM4 less power is lost during the signal transmission and the signal can be transmitted further or through more connectors (which add to the losses). The following table shows the Ethernet distances at 850 nm supported by OM3 and OM4 respectively.

So why is the standard for 40G only 100m on OM3 and 150m on OM4 compared to 300m and 500m for 10G? There are two reasons. First, when the IEEE 802 standard was created they decided to create a standard based on “relaxed” transceiver specifications so that smaller and lower cost transceivers could be used. Two functions of 10G transceivers (clock recovery and attendant re-timing) are absent in both QSFP+ (40G) and CFP (100G) devices. Second, the standard allows for transceivers with wider spectral width lasers which increase chromatic dispersion (pulse spreading). The quality of transceivers is also a factor.

Which will you choose for your 40/100G network, OM3 or OM4? Except the transmission distance and the cable costs, there are additional factors to consider such as the number of cross connects required and the mix of 40G port to 40G port and 40G port to 10G port. Because 40G signal is transmitted across eight pairs of fibre each with 10G. Similarly, it is important to take into account the likely location of future 100G equipment and the possible 100G to 100G, 100G to 40G and 100G to 10G connectivity requirement.