Optical transmission uses pulses of light to transmit information from one place to another through an optical fibre. The light is converted to electromagnetic carrier wave, which is modulated to carry information as the light propagates from one end to another. The development of optical fibre has revolutionized the telecommunications industry. Optical fibre has replaced other transmission media such as copper wire since inception, and is mainly used to wire core networks. Today, optical fibre has been used to develop new high speed communication systems that transmit information as light pulses, examples are multiplexers/demultiplexers using the optical multiplexing technology.

Multiplexer (Mux) is hardware component that combines multiple analog or digital input signals into a single line of transmission. And at the receiver’s end, the multiplexer is known as DeMultiplexer (DeMux)—performing reverse function of multiplexers. Multiplexing is therefore the process of combining two or more input signals into a single transmission. At receiver’s end, the combined signals are separated into distinct separate signal. Multiplexing enhances efficiency use of bandwidth. Here is a figure which shows the principle of optical multiplexing/demultiplexing.

Optical Mux and DeMux are required to multiplex and demultiplex various wavelengths onto a single fibre link. Each specific I/O will be used for a single wavelength. One optical filter system can act as both Mux and DeMux. Optical Mux and DeMux are basically passive optical filter systems, which are arranged to process specific wavelengths in and out of the transport system (usually optical fibre). Process of filtering the wavelengths can be performed using Prisms, Thin Film Filter (TFF), and Dichroic filters or interference filters. The filtering materials are used to selectively reflect a single wavelength of light but pass all others transparently. Each filter is tuned for a specific wavelength. 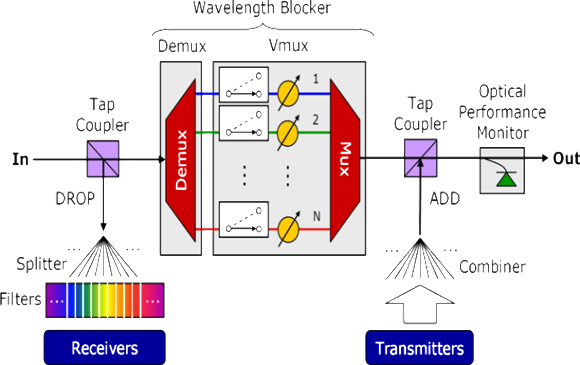