The Catalyst 9300 Series is the next generation of the industry’s most widely deployed stackable switching platform. Built for security, IoT, and the cloud, these network switches form the foundation for Cisco’s Software-Defined Access, the leading enterprise architecture. In addition, the Cisco Catalyst 9300-based models support a variety of uplink modules for both copper and fibre uplink support. These models add even more flexibility to the interface choices that you can make in a single Cisco Catalyst 9300 Switch or in a stack of Cisco Catalyst 9300 Switches. 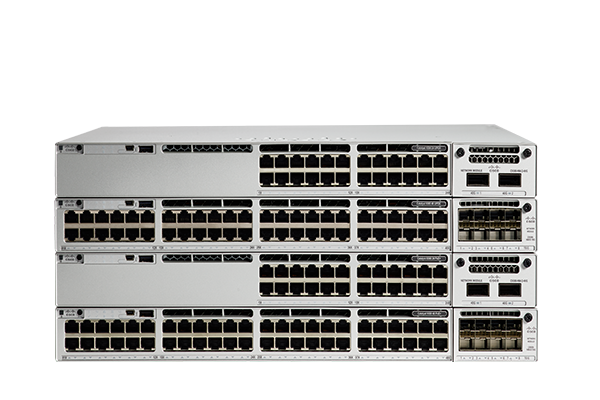 The Cisco Catalyst 9300 Series Switches support optional network modules for uplink ports. All modules are supported across all 9300 platforms:

Digital disruption is changing how we think about our networks. Whether customers or employees, the “experience” has become a strategic imperative. The Cisco Catalyst 9300 Series fixed access switches are designed to help you change your network from a platform of connectivity to a platform of services. If you are in need of compatible optical transceivers for Catalyst 9300, give FS.COM a shot. FS.COM provides a wide range of supported optical transceivers for Cisco Catalyst 9300 series switch. Each one of them has been tested with assured 100% compatibility to them.

Recently, Cisco unveiled the Catalyst 9000 family, shaping the new era of intent-based networking. The Network. Intuitive. The Cisco Catalyst 9000 series switches are the next generation of enterprise-class switches built for security, Internet of Things (IoT), mobility, and cloud. These switches form the foundational building block for Cisco Software Defined Access (SD-Access). And what’s more, they also support full IEEE 802.3at Power over Ethernet Plus (PoE+), and Universal Power over Ethernet (UPoE). These switches enhance productivity by enabling applications such as IP telephony, wireless, IoT, and video for a true borderless network experience. This post will take a closer look at Catalyst 9000 switches and some highlights of them.

Members of the Cisco Catalyst 9000 Family

The new Cisco Catalyst 9000 switches use an Intel x86 processor to help create a network that constantly learns and adapts. Above the feature, Cisco adopts a central software console called the Cisco Digital Network Architecture (DNA) Centre that replaced the obsolescent and deprecated command-line interface (CLI). DNA is about bringing the power of automation, ease of management, and predictable performance to networks while driving down cost.

The following diagram lists the supporting detailed transceiver options for Catalyst 9300 Series. Take C9300-NM-4G as an example, this module has four 1G SFP module slots. Any combination of standard SFP modules are supported.

The Cisco Catalyst 9000 series switches solves some persistent challenges of enterprise networks by utilising platform innovations built around four key areas: security, Internet of Things (IoT) convergence, mobility and cloud readiness. There is no doubt that Catalyst 9000 is leading us to a new era of faster and securer network. And if you need any transceiver or cables for mating Cisco Catalyst 9000 series, please contact us via sales@fs.com. All the products offered by FS.COM are tested before shipping to ensure superior quality.