As the data speeds increase from Fast Ethernet to Gigabit Ethernet, cables for the network connection are also required to be improved. Cat6 and Cat6a are two kinds of copper cables for Gigabit Ethernet. “A” is short for “augmented”. Cat6a is an enhanced Cat6 cable. Cat6 vs Cat6a, Do you know which one to use? Could these two categories replace each other? Now this article will tell some of their differences from several sides. 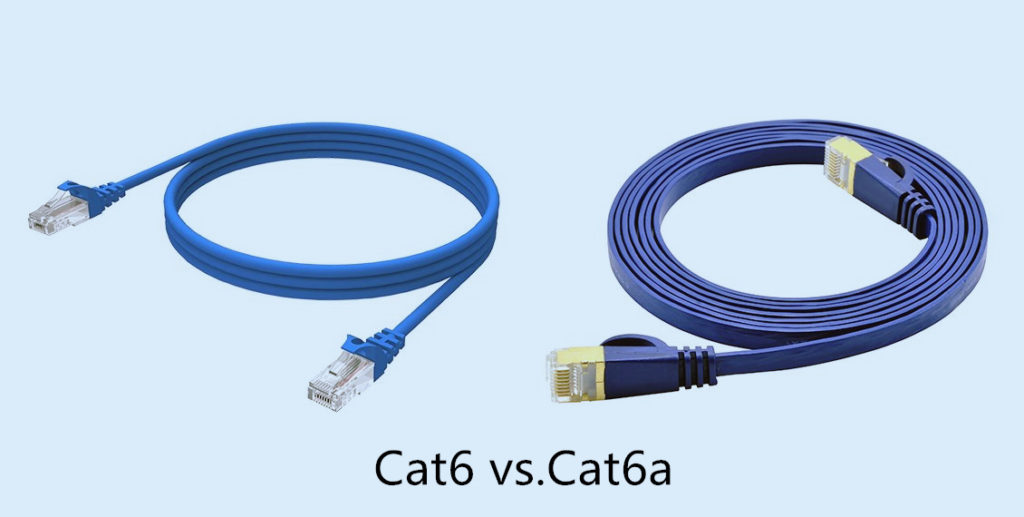 Copper cables have shielded twisted pair (STP) and unshielded twisted pair (UTP). STP cable means there is one or more additional jackets surrounding the inner twisted wire pairs for insulation. The shielding is beneficial for protecting cable from electromagnetic interference (EMI). (For more information about STP vs. UTP difference, you can refer to my blog “STP vs. UTP, Which One Is Better?” .) Cat6 and Cat6a cables also include these two types. Though shielded Cat6 cables are available in the market, unshielded versions are easier to get. On the contrary, shielded Cat6a cables are more common.

Take Fiberstore as an example, the average cost of 1m Cat6 cable is about 1.00 US$ and more than 3.00 US$ for 1m Cat6a cable (cables maybe more expensive on other sites.). The more cables you purchase, the bigger the price difference will be. And the price difference is not only caused by the cable. Other matched connection components should also be considered.

Cat6 vs Cat6a, Which One Should You Buy?

Although Cat5e cable can meet the current needs in your home or office, higher bandwidth will be required in the near future. So you should upgrade your network with Cat6 or Cat6a cables which can provide greater bandwidth. At that time, you need to figure out which one to buy. If you install cables in a small room or business offices where cables might get close to one another, then Cat6a is better than Cat6 due to the alien crosstalk. Cat6 cables especially the unshielded cables, are much more prone to alien crosstalk than Cat6a, which uses superior insulation to protect its wiring.

From this article, you can make a clear identification of Cat6 and Cat6a cables. When you plan to purchase cables, you need to consider their differences like shielding, transmission distance, cost, durability, etc. Hope you can choose the suitable cable and build a high performance network.