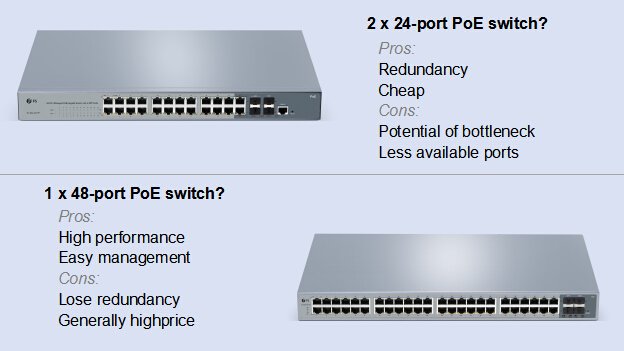 In terms of the cost, usually one 48-port PoE switch will cost more than two 24-port PoE switches of the same model, but it does not mean always. For example, buying the 48-port PoE+ managed switch FS S1600-48T4S is lower than buying two 24-port PoE+ managed switches FS S1600-24T4F. If we have a tight budget and concerns cost saving most, the 1 x 48-port switch vs. 2 24-port switch debate can end here by buying the cheaper choice. Otherwise, we have more factors to consider.

When we decided to install only one 48-port switch versus 2 x 24-port switch, there are also some concerns in practice. The biggest issue is that we lose redundancy. If we have only one switch and it fails, we’re chained until we get the replacement, which could be over 24hrs away. But in a two switches’ scenario, if one switch fails at least half of our devices can still be up and running. Another thing we may lose is the separate placing of the 2 x 24-port switches. If we have a single rack to install them, then there’s no issue but if we want to place desktop switch for IP cameras and IP access points in different offices, we may not go with a 48-port PoE switch.

The concerns that we discuss in this post are general ones that we may have in choosing one 48-port switch vs. 2 24-port switches for PoE devices. The final decision should depend on our key purpose of buying them. The above factors are several things that we can take into account when we face the similar issue.

Related article: How to Choose a Suitable 48-Port PoE Switch?