What is an Optical Transceiver Module?
A fiber optical transceiver is a device that can send and receive optical information. By using an optical transceiver, network spend less space and steer clear of the necessity of getting a transmitter and receiver in the network. Able to transmit information further and faster than older models, the more recent transceivers are utilized and appearance, creating more compact, smaller sized modules than ever before.

Principle of Optical Transceiver Modules
Optical transceiver generally includes both a transmitter and a receiver in a single module. The transmitter and receiver are arranged in parallel so that they can operate independently of each other. Both the receiver and the transmitter have their own circuitry so that they can handle transmissions in both directions. The transmitter takes an electrical input and converts it to an optical output from a laser diode or LED. The light from the transmitter is coupled into the fiber with a connector and is transmitted through the fiber optic cable plant. The light from the end of the fiber is coupled to a receiver where a detector converts the light into an electrical signal which is then conditioned properly for use by the receiving equipment. 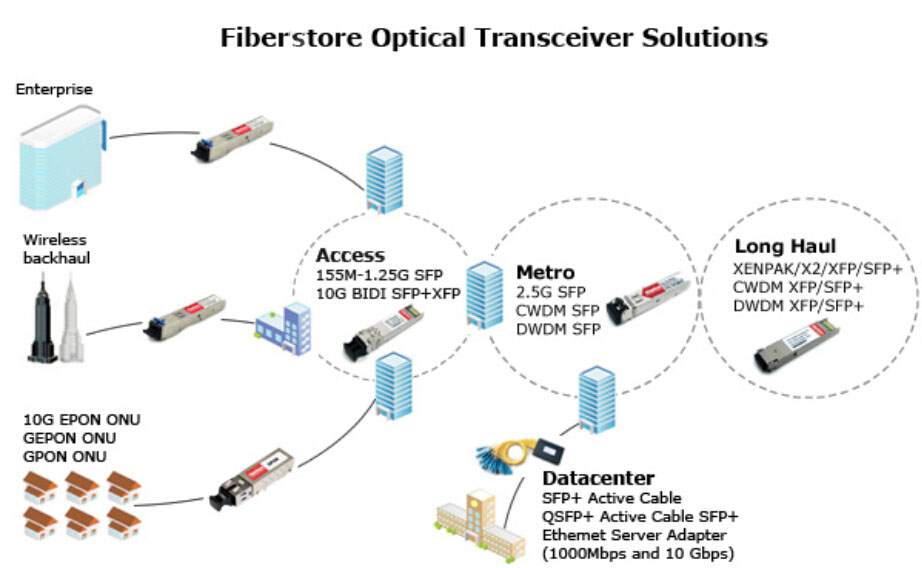 Application of Optical Transceiver Modules
Optical transceiver, essentially just completed the converted of data between different media, can realize the connection between two switches or computers in the 0-120km distance. Its main function is to achieve the conversion between optical-electrical and electrical-optical, including optical power control, modulation transmission, signal detection, IV conversion and limiting amplifier decision regeneration. In addition, there are some functions like security information query, TX-disable. Here is a summary in the practical application.

Optical Transceiver modules can be classified according to the following aspects.

2. Optical Fiber Count
Simplex fiber transceiver and Duplex fiber transceiver. The simplex version receives the data sent in a single fiber transmission, While the duplex one receives data transmitted on a dual fiber transmission.By definition, single fiber devices can save half of the fiber, a fiber that is in the receive and transmit data, where the fiber is very applicable to resource constraints. These products use the wavelength division multiplexing techniques, mostly using the wavelength 1310nm and 1550nm.

Fiberstore is a worldwide leading manufacturer & supplier of compatible fiber optical transceivers. We produce and stock for a full range of transceivers such as SFP Plus (SFP+), X2, XENPAK, XFP, SFP, GBIC. In the market, there are many brands of fiber optic transceiver, such as HP, Cisco, NETGEAR, Dell, etc. The following table is the order information of HP SFP transceiver:

Multi point fibre optic distribution system is the broad wireless technology used to deliver voice, data, Internet, and video services. It has been allocated for that deliever broadband services in a point to point or point to multi point configuration to residential and commercial customers. As a result of the propagating characteristics of signals so that the systems use a cellular like network architecture, though services provided are fixed, not mobile.

In some cases fibre optic distribution system has an ability to connect several remote sites to one base station. One common application is that the repeaters based on a major building and others building such as RF shielding areas and basement which all located in a few miles repeater building. A and the repeater use the head end. A multiple fibre optic transceiver assembly at the base station is commonly called a “head end” The distance end of the fibre is called “remote hub” equipment. We need to pay attention to that each fibre optic receiver output at the repeater site has individual pads to reduce the composite noise floor. For example, if used the 40dB, an additional 80 dB of combiner port-to-port isolation occurs. In real application, it is a good idea, including regard the taps at test point to read the RF levels. Just used for testing and protection. A similar system that when we used the WDM, if the numbers of fibres are reduced by 50% but a WDM must be added at each remote site and another WDM for each fibre added at the repeater site. In the 4 remote site example, it would be taking 8 WDM’s to operate all the fibres full duplex and 4 fibre optic transmitters would have to be 1550nm models. Then there also a point we need to be careful. Fibre optic transceiver is not frequency selective and the same unit can receive 1330 or 1550nm optical signals equally well. We also measured the noise performance and we are happy to inform you that in line with theory, optic splitters practically do not add any noise. No matter what output we tested, this means that your receiver connected to such network would also show very high quality readings.

When we use the fibre optic links in the fibre optic distribution system, sometimes we need fibre optical splitter to split the signal which carried. The system designer has the choice of splitting either the optical or RF domain. The function of optical splitter is familiar to RF splitter. Other parts of the incoming fibre optic network are connected to the transmission of output, and the terminal device is connected and the another main part is its direct part. There are also splitters that divided the input into 2, 4 or more outputs. According to the structure and locations of fibre optic splitter, in the fibre optic network, we need different split ratios of splitter, such as 1×2, 1×4 and 1×8 splitter?and so on. Moreover unused single mode fibre cable, specific products can see at 50m single mode, it also can strengthen the signal used for the RF over fibre optic systems between the connected buildings for data communication and spare fibres.

CDFP MSA vendors are interchangeable in terms of mechanical and electrical products, this project will set electrical interface, optical interface and mechanical interface, may include optical fibre connector and plug with cable plug, electrical connectors, guide rail, the front panel and the main PCB layout requirements. Moreover, MSA specification is expected to include thermal, electromagnetic and electrostatic discharge design.