DWDM is a very effective means of sharing transmission costs when fibre and other common components, such as optical amplifiers, dominate the overall system cost. The aggregate capacity of a single optical fibre can be increased by either increasing the bit rate or by increasing the number of wavelength channels using DWDM. The former requires development of new high-speed electronics, while DWDM allows fibre and fibre amplfier costs to be shared among all channels, driving down the total system cost per channel. Since information must still be coded onto the wavelength channels, today’s long-haul systems combine time-division multiplexing(TDM) with DWDM, taking advantage of high speed TDM advances to further reduce the system cost per bit per channel. 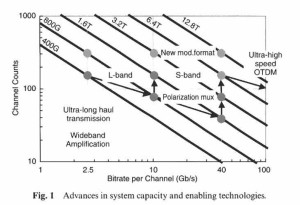 Current long-haul system development efforts have focused on wide-band DWDM and ultra-long transport. These systems are enabled by new modulation formats, wideband amplification, wideband dispersion compensation and the use of forward error correction coding. Taken as a whole , these systems will deliver the lowest cost per transmitted bit over the longest distance . Optical fibre is an integral component of the entire system. T he fibre’s parametres have a significant impact on both cost and performance and influence the choice of most other components, such as amplifiers and compensators. In fact ,the use of wideband DWDM over ultra-long distances has elevated the fibre requirements in terms of dispersion management, nonlinear performance, distributed gain, spectral loss, and polarization mode dispersion (PMD).

The first applications of fibre optic communication were to carry aggregated voice traffic between major metropolitan areas, such as the trunk lines from Washington, DC to Boston. In the United States, typical distances between major switch centres are on the order of 1600 km, while in Europe, these distances are typically 400 km. However, with the advent of all-optical or photonic switching located at these centres, the transmission distances without electronic regeneration could reach well into the thousands of kilometres in both cases, with the application space for these systems spilling over into the metro and regional networks. Such ultra-long distances have historically been reserved for point-to-point undersea fibre systems where transoceanic distances are typically 10,000 km and 4000 km for Trans-Pacific and Trans- Atlantic routes, respectively. As these distances are approached in terrestrial applications, it is not unreasonable to think of using similar system solutions for land applications. 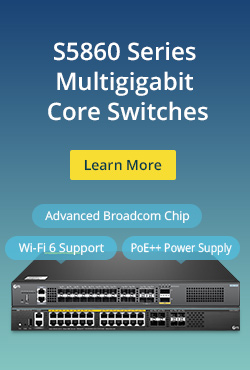