To transmit data back and forth across the Internet, an IP address that administrators have to accomplish and configure on a router or Lay3 fibre switch is the essential cornerstone of a host. Besides, when you want to communicate with other networks, you need to know the default gateway address and subnet mask for the local network, as well as the DNS server. DHCP can help you get all the information dynamically. So what is DHCP and how it works?

DHCP wiki defines the term dynamic host configuration protocol as a network management protocol used on UDP/IP networks. It assigns an IP address and some other configuration parameters to each network device automatically, so that the device will be authorized to communicate with other IP networks. This means users don’t need to configure the network, just plug the wire into your computer or connect to the WiFi, your computer will automatically receive the IP address, subnet mask, default gateway and DNS server. Then how to enable DHCP? DHCP can be installed on a single server or integrated in most network equipment like a Gigabit PoE switch, a router or even the firewall. The following are some related terms we should know.

What Are the Advantages of DHCP?

DHCP protocol reduces the complexity and numbers of administrative work by using automatic TCP/IP configuration. This is the greatest benefit. Today, no matter in the data centre or at home, more and more devices are being networked from printers and fax machines to TV and fridges. Often times, these devices are placed in different locations, without DHCP, you have to get up out of your comfy chair and find the device and configure each manually. But assisted by DHCP protocol, all you need to do is changing the settings on the server or may be a 10gbe switch. As addresses are assigned automatically, there is no need to keep a record of the used and free ones. Besides, DHCP snooping can detect unauthorized DHCP server on the network.

As the title mentions what is DHCP and how it works, now we have learned what DHCP is, let’s turn to its operation. In essence, DHCP leases IP address and other parameters to the specific clients for a period of time. The following picture shows how DHCP works. 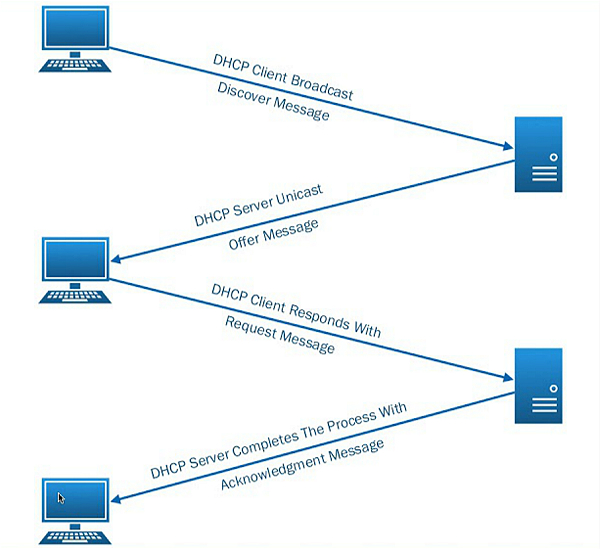 Step one: When a new client wants to join a network, it will broadcast a DHCP discover packet to the servers.

Step two: To answer the request, DHCP servers will send the free DHCP offer packet to the client.

Step three: The client takes the first DHCP offer message from different serves. Then it will send a DHCP request to the Internet to indicate which IP address it has taken.

Step four: DHCP server sends an acknowledge message to make sure the IP address has been used that will not assign to any other client. And now the client can participate on the network.

With regard to the question, what is DHCP and how it works, I think you have found the answer. Any questions of DHCP or network switch supporting DHCP, you can visit FS.COM or contact via sales@fs.com.