Optical networking technology has solved the problem of increasing demand for higher transfer data rates and larger bandwidths. In optical network, optical fibre is the fundamental medium of transmission. However, switching, signaling and processing functions are accomplished electronically. So optical switches are naturally developed. Optical switches are widely used for optical protection, test systems (as shown in the following figure), and remotely reconfigurable add-drop multiplexers, etc. 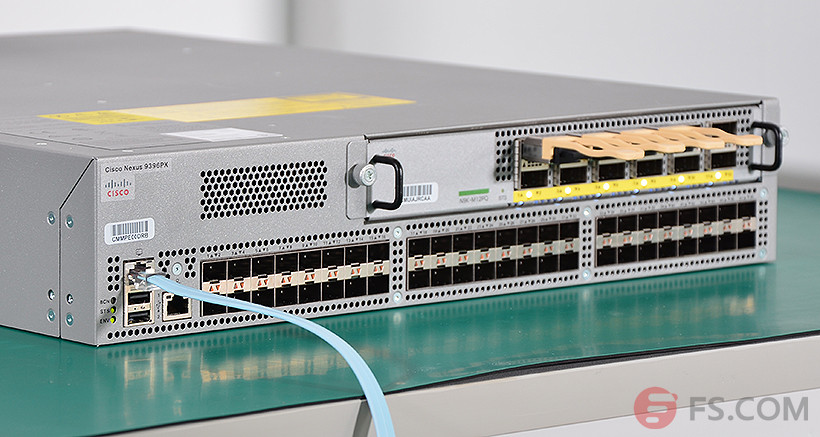 An optical switch is simply a switch which accepts a photonic signal at one of its ports and send it out through another port based on the routing decision made. There are two kinds of optical switches, including O-E-O (optical–electrical–optical) and the O-O-O (optical–optical–optical) also called all optical switch. OEO switch requires the analogue light signal first converted to a digital form to be processed and routed before being converted back to an analogue light signal. While OOO switching is done purely through photonic means.

On one hand, optical switches can save floor space and power consumption significantly. They can save up to 92 percent space and 96 percent power. If translating power savings into cost, it means 3 kw can be reduced for each rack. This can save the carrier from expensive diesel power generators, rectifiers and batteries, the monthly maintenance costs for these devices and the purchasing and maintenance of cooling equipment for these devices.

Despite those advantages, optical switches still have some problems.

Current optical switching technology can’t realize the technology that photonic signals can be as stored as easily as electrical signals. It is possible to store them using fibre delay lines, as light take a certain time to travel through lengths fibre (200,000 km per second in silica). That means a 10000 bit frame traveling at 10G b/s requires 200m of fibre. This is both expensive and impractical. And once a signal is put through a delay line, it cannot be processed until it comes back out. A solution to this is through adding switches within the lines, but that needs more costs.

The other problem with all – optical switching is that it cannot process header information of packets, especially at such high speed which the signals travel at. The maximum speed electronic routers currently can operate is at 10 Gb/s while optical signals can travel up to 40/100G or even higher. Thus, the routers will not be able to process the signals as fast as the transmission.

Optical switches are widely applied in the network.

Second, optical switches are used for switching protection. If a fibre fails, the switch allows the signal to be rerouted to another fibre before the problem occurs. But this will take milliseconds including detecting the failure, informing the network and switching. Normally this operation requires a 1×2 switch but with complicated cross-connects hundreds may be required.

As the demand for video and audio increasing the challenge of data capabilities and high bandwidth of networks, optical network is absolutely the most cost-effective solution. Optical switches can provide the customers with significant power, space and cost savings. Today, the optical switch market is dominated by several companies, such as Cisco, HP, Arista, Juniper. In early days, original optical transceivers were required to be plugged into these switches. Later, to save the cost, third-party optical transceivers were produced. If you need optical transceivers compliant with these switches, please visit FS.COM.

At the time that Cisco involved in the “Prism” incident, the market research firm Synergy Research Group released data show that Cisco has beat IBM and HP and become the largest provider of IT products. While Cisco’s annual revenue in China has exceed 1.6Billion USD, accounting for 30% of the total profits.

This is the so called “Prism”, This is called “Prism”, the secret use of a super software to monitor Internet users and telephone records. Now, about a hero or a traitor Snowdon debate is still in progress, Snowden’s whereabouts is still pending. Apart from these troubles to see companies and industries involved, the stakes is obvious.

According to Snowden’s disclosing, Google, Yahoo, Microsoft, Apple, FaceBook, AOL, PalTalk, Skype, YouTube and other nine companies has been involved in espionage allegations, these companies are suspected to have open the servers to the U.S National Security Agency, allowing the government to easily monitor millions mails, instant calls and access of the data of millions of Internet users worldwide.

Subsequently, these companies strongly denied the charges. But by June 14, Facebook, Microsoft for the first time admitted that the U.S government did have asked for user data from them and they have published some of the information and data content in order to get rid of the morass “Prism door” as soon as possible.

At the same time, China domestic media has shifted the perspective of some U.S communication companies which may threat the national potential information security, such as Cisco because Snowdon exposed the NSA monitor Chinese network and computers via Cisco routers.

Allegedly, Cisco have participated almost all the large network projects, involving government, customs, postal services, banking, railways, civil civil aviation, medical, military and other critical sectors of network construction, as well as China Telecom, China Unicom and other telecom operators network infrastructure. China Telecom 163 and China Unicom 169 is the two of Chinese most important backbone networks, both of which has carries more than 80 percent of China’s Internet traffic. But in these two backbone network, Cisco accounted for more than 70% share, and dominated all the super-core nodes.

However, Cisco is the main supplier of equipment and network technology of American government and military communications. In 2006, the In 2006 the United States 115 government departments involved a “Cyber ​​Storm” network warfare exercises, Cisco is one of the designers of the important exercises. Therefore, security experts worry that once the war broke out, the U.S. government is likely to take advantage of Cisco products deployed worldwide to launch cyber warfare, the implement a fatal strike of their enemy.

Some fine moves of Chinese telecommunication operators may reflect this concern, In October last year, China Unicom completed 169 core backbone network node cluster router Wuxi relocation project, which is the communications industry’s first cluster of Cisco routers relocation project. This is likely to be a landmark event, indicating that China’s telecommunications companies have begun to address the issue of information security, and began to carry out the replacement of existing network equipment.

At the time that Cisco involved in the “Prism” incident, the market research firm Synergy Research Group released data shows, Cisco has beat IBM and HP and become the largest provider of IT products. While Cisco’s annual revenue in China has exceed 1.6Billion USD, accounting for 30% of the total profits. It can be expected, “prism” incident may make Cisco’s business in China clobbered. In addition to Cisco, it is anticipated Microsoft, Apple and other companies’ business in Chinese will also be affected.

In fact, at the time of the U.S blocked Huawei, ZTE last year, security experts had called on on the government should pay attention to our country’s network security issues. Therefore, I believe, in the rise of cloud computing and big data, the state the state has been increasing emphasis on network and information security at the time, “prism” incident is a bigger warning, perhaps the next will be on our network security legislation, the government , the central enterprises, the military and other domestic purchases made ​​explicit.

From the enterprise technical reserves point of view, China’s current level of communication technology has reached world standards, local businesses have been able to build a comprehensive bearer network and security operations. Therefore, the upgrade national information security strategy will not only be good for Huawei, ZTE and other communications equipment manufacturers, but also benefit the extensive companies involved in cloud computing, big data.