When it comes to connecting a lot of VoIP phones and IP cameras, a 48 port PoE switch is great for powering them. Whether it is for home use or business use, a 48 port PoE switch can best solve the problems of installing these PoE network devices in places that have no power lines. If you need to know the application of 48 port PoE switch in access and core area, you could read Deploying 48-Port Gigabit PoE Managed Switch in Different Networks. Due to the high capacity and power supply feature, a 48 port PoE switch price is often higher than a standard 48-port Ethernet switch with no PoE. In this post, we will introduce some cheap 48 port PoE switches and do a comparison between them. 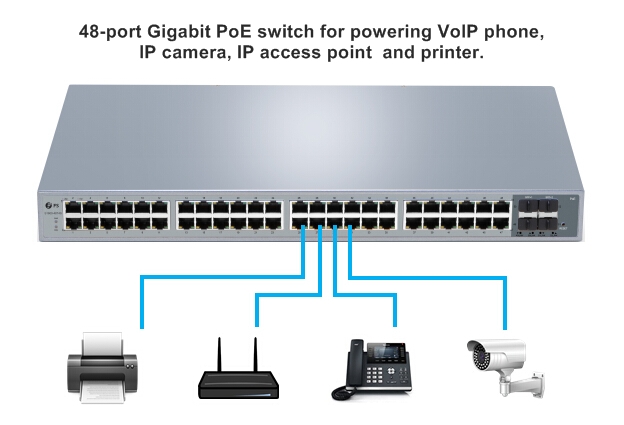 The table below gives some basic parameters of these four switches, including the port type, supported data rate, the maximum PoE power consumption, switching capacity and forwarding rate.

The UniFi US-48-500W is a 48-port Layer 2 access switch. In addition to 48 Gigabit RJ45 ports, it has 2 fibre ports of Gigabit SFP and 2 fibre ports of 10G SFP+. It has a non-blocking throughout of 70 Gbps, which is sufficient for typical home use and most small business use. But compared with the other three 48-port PoE switches, it lacks some Layer 3 features. The other three are Layer 2+ switches that support static routing and access resolution protocol (ARP) inspecting, which are simple but efficient approaches in segmenting and securing the network.

Obviously, the switching capacity (or backplane bandwidth) and forwarding rate of the FS S1600-48T4S are the highest among these four switches. It has four 10G uplink ports, which allows large traffic from the access switch to the core switch and ensures high speed and precise transmission and recording without delay. Meanwhile, it supports the largest power to the device, which is suitable for connecting more PoE network devices. This 48 port PoE switch price is lower than two of the other switches. 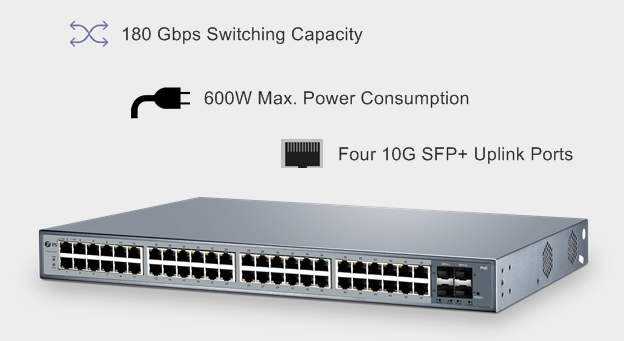 Common Benefits and Features of the Four 48-Port PoE Switches

These four 48 port PoE switch price are much lower than that of high-end PoE switches. They are all managed PoE switches equipped with 48 10/100/1000Mbps Rj45 ports of auto-sensing IEEE 802.3af (PoE), which provides a maximum per PoE port output power to each device of 15.4 W. They also support IEEE 802.3at (PoE+), which enhanced the max. per port power consumption to 30 W. All of them have been equipped with fibre uplink ports.

Another common feature is that these four 48 port PoE switches all support easy management. And the managing function is not limited to only one type. They all have an RJ45 console port or a serial port for managing through web-based graphical user interface (GUI, IPv4/IPv6) or command line interface (CLI).

This post has compared the 48 port PoE switch price and function. They are generally inexpensive and suitable for both home use and business use. The managing functions are simplified compared with high-end switches, in order to help better management of the network. If you want 10G uplink, UniFi US-48-500W or FS S1600-48T4S are recommended. Before purchasing a 48 port PoE switch, be sure to check the power requirement for your total PoE devices, the standard it complies to and the overall PoE budget of your installation.