The dramatic growth in data center requires the higher-performance servers, storage and interconnects. From initial 100M, 1G, 10G, to 40G and 100G, high speed Ethernet has never stopped developing. The standard for 10 Gigabit Ethernet (IEEE802.3ae) was ratified in 2002. In 10 Gigabit Ethernet, there are mainly three media: 10G SFP+ transceiver, SFP+ DAC cable and 10GBASE-T SFP transceiver. This post will discuss 10GBASE-T vs SFP+ vs SFP+ cable.

SFP+ (small form-factor pluggable plus) supports both fibre optic cables and DAC (direct attach cable). It delivers a wide variety of 10GbE Ethernet connectivity options for data center, enterprise wiring closet, and service provider transport applications. But it has the limitations that will prevent the media from moving to every server.

SFP+ cable is designed for 10GbE access layer interconnection in data center. It includes direct attach copper cables and active optical cables. DAC is a lower cost alternative to fibre, but it can support limited transmission distance and it’s not backward-compatible with existing GbE switches. DAC requires the purchase of an adapter card and requires a new top of rack (ToR) switch topology. DAC is more expensive than structured copper channels, and cannot be field terminated.

10GBase-T SFP enables 10GbE connections with unshielded or shielded twisted pair cables over distances up to 100 metres. 10GBase-T technology appears as SPF is not compatible with twisted pair cabling system typically used in data centers. With 10GBase-T SFP, the migration from 1GbE to 10GbE can be easily achieved.

This part will dicuss 10GBASE-T vs SFP+ vs SFP+ Cable from the aspects of latency and power consumption:

As to 10GBASE-T SFP, the physical connection (PHY) standard uses block encoding to transport data across the cable without errors. The block encoding requires a block of data to be read into the transmitter PHY, a mathematical function run on the data before the encoded data are sent over the link. It happens the same on the receiver side. This standard specifies 2.6 microseconds for the transmit-receive pair, and the block size requires latency to be less than 2 microseconds. While 10G SFP applies simplified electronics without encoding, and common latency is around 300 nanoseconds per link.

You may think that two microseconds are not high. But what if a TOR infrastructure where traffic is passing 4 hops to reach the destination? 10.4-microsecond delay will be caused when using 10GBASE-T SFP. The following table tells details about the latency of SFP+ cable, 10G SFP and 10GABSE-T SFP for different number of links.

From the above table, it shows that the latency of 10GBASE-T SFP is the highest. As network links grow, the latency turns to be higher. It’s known that the lower latency, the faster the network speed. High latency in the data center infrastructure results in delays in CPU and application works, therefore limiting data center efficiency and increasing operational costs.

10GBase-T components today require anywhere from 2 to 5 watts per port at each end of the cable depending on the distance of the cable. But 10G SFP requires about 0.7 watt regardless of distance. The figure below compares the power consumption of three media options of 10GbE Ethernet. 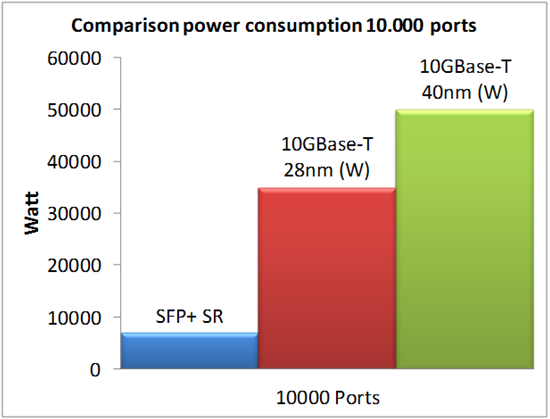 From this article, 10G SFP+ and SFP+ cable solutions are better than 10GBASE-T SFP for 10G data center. But 10GbE is not the ultimate goal. Besides factors mentioned in this article, you should also select a cabling solution which can support not only current needs but also future data center deployments when you design 10GbE network. You can find various SFP+ modules and 40G QSFP+ from FS.COM.

Related article: How to Convert SFP+ to 10GBASE-T/RJ45?