Maintaining the correct polarity across a fibre network ensures that a transmit signal from any type of active equipment will be directed to the receive port of a second piece of active equipment–and vice versa. The polarity means that once the signal is received, the electronics will sort out and organize the stream of data. Transmits will be connected to receives. Every send needs its own receive just like the ball players with pitchers & catchers. For 10G transmission, Pitcher 1 needs to throw to Catcher 1, Pitcher 2 to Catcher 2 and so on. For 40/100G, any pitcher can throw to any catcher. But if you’ve got two catchers looking at each other – the play can’t go on.

According to the TIA 568 standard, there are three methods for configuring systems to make proper connections, Methods A, B & C for multi‐fibre arrays using MPO/MTP connectors. Each of these methods handle the transition from a transmit position to a receive position in a slightly different manner, and each employs a backbone cable that is constructed in a specific manner.

Before looking at each method in detail, it’s necessary to know MPO/MTP connectors. The following will introduce MTP connector. Each MTP connector has a key on one side of the connector body. When the key sits on top, it means the key up position. In this orientation, each of the fibre holes in the connector is numbered in sequence from left to right. We will refer to these connector holes as positions, or P1, P2, etc. There is also a white dot marked on the right connector body to designate the position P1 of the connector when it’s plugged in.

MTP adaptor is designed to hold the two MTPs. As each MTP has a key, there are two types of MTP adaptors (as shown in the following figure):

Type A—key-up to key-down. Here the key is up on one side and down on the other. The two connectors are connected turned 180° in relation to each other; 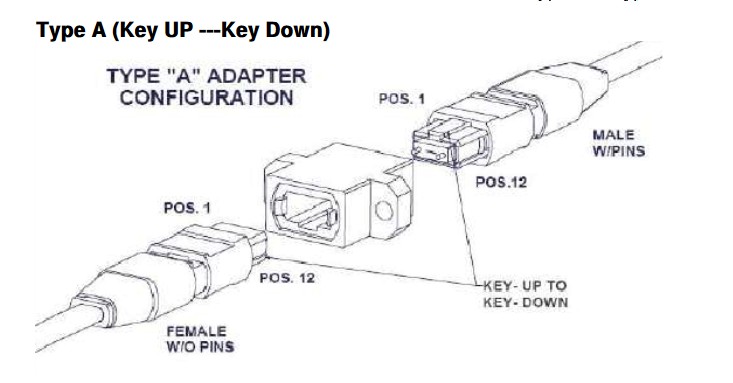 Type B—key-up to key-up. Here both keys are up. The two connectors are connected while in the same position in relation to each other.

To upgrade to 40G/100G data transmissions, network designers should better understand well the MPO/MTP polarity. Select the right types of MPO cables, MPO connectors, MPO cassette and patch cables, the proper solution for data centres would be achieved with high density and flexibility and reliability.